I continue with the post of James H. Fetzer, PhD, (at least the part that Raff* Sink hasn't altered....yet) on The Oswald's Incompetent Clowns website.

He has explained with twisted logic that supposedly Oswald was out front, in the entryway, of the Texas School Book Depository, when President was shot. He has claimed that Billy Lovelady, seen in the Altgens6 photo, is actually Oswald. All evidence to date has proven this claim to be false.

Actually, the clothing of Lee Oswald was taken into consideration by researchers over the years, when it comes to the claim that Oswald was in the doorway. Through emphasizing FBI malfeasance and unadulterated bullshit, the OIC has proclaimed to have re-solved a mystery that was settled many years before.

Fetzer emphasizes the clothing...in detail. Something hard to do when you consider that their "Doorman"'s clothing seen in Altgens6 consists of a shirt and a partially exposed t-shirt. The position of the OIC has morphed over the years where originally, Raff* Sink was claiming that their "Doorman" was wearing a plaid shirt and that Oswald's shirt at a distance, took on a plaid appearance to no the shirt is in no way plaid to finally come full circle and claim that the mysterious "they" altered Oswald shirt to look plaid. Fetzer ends this section by claiming that Lovelady went to the FBI and showed them the shirt he wore that day, an "incredibly implausible thing to do unless it were true". The problem is that it isn't true.

As you will find on the pages of the OIC, Raff* Sink and Richard Hooke have half-assed their way to try to convince the world that they have exonerated Oswald. To date, the OIC and it's collective clown posse has yet to provide any proof that Altgens 6 was altered. Anyone familiar with Fetzer knows full well that he relies on his "expertise" in scientific reasoning yet falls short in exhibiting any, on any subject.

More circular reasoning. The OIC cannot produce any proof that Altgens 6 was altered. None.

In the case of Oswald telling Fritz that he was "out with Bill Shelley in front", the FBI contained it in one report and Bill Shelley was specifically questioned about that by the FBI and the Warren Commission.

This is the statement made by Bill Shelley to the FBI.... 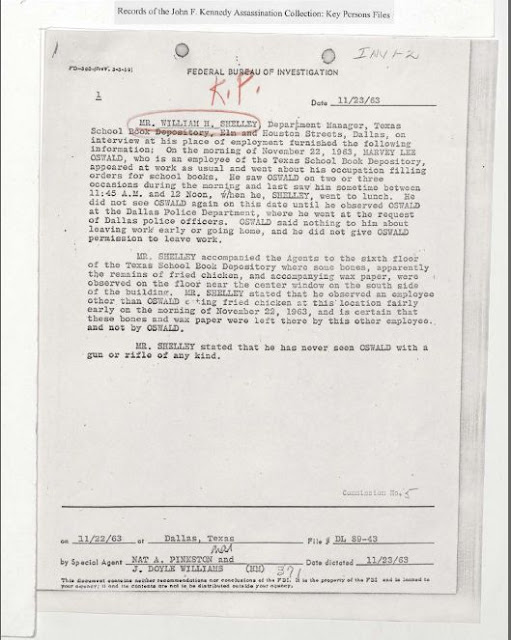 Shelly's testimony before the WC....

It stands to reason that the FBI and the Warren Commission questioned Shelley specifically about Oswald leaving work because of what Oswald told Fritz in the presence of the FBI.

Now, let's discuss Fetzer's scientific reasoning and the "inference to the best explanation". The OIC claims that Oswald had to mean that he was out with Bill Shelley in front during the shooting. Every report that covers Oswald's comment about where he was during the shooting state that Oswald said he was on the first floor. Secret Service Inspector Kelley specifically asked Oswald if he had watched the parade and Oswald said no. The OIC claim that Bill Shelley left the front of the TSBD immediately after the shooting  has been shown to be false.

Now which explanation is the best....Oswald was exactly where he said he was during the shooting or everyone that wrote a report lied, a photograph that hit the news wire within an hour of the shooting was secretly altered by the mysterious "they" and everyone standing next to Bill Shelley was able to cover up the fact that Oswald was right out front with them the whole time.

The statement above proves that James H. Fetzer, PhD, is a loon. And I'm not the only one that thinks so.

While there is no reasonable alternative to his hypothesis that Oswald was the "Man in the Doorway", there is certainly a preponderance of testimonial and photographic evidence proving that the man was Billy Lovelady.

That wraps up the Overview page of the Oswald's Incompetent Clowns website. Next we will move on to the Oswald page.....
Posted by bpete1969 at 12:28 AM