The Professor Has The Floor

Today, I am posting a response to Raff* Sink by Professor James Norwood, Former Chairman of the OIC. 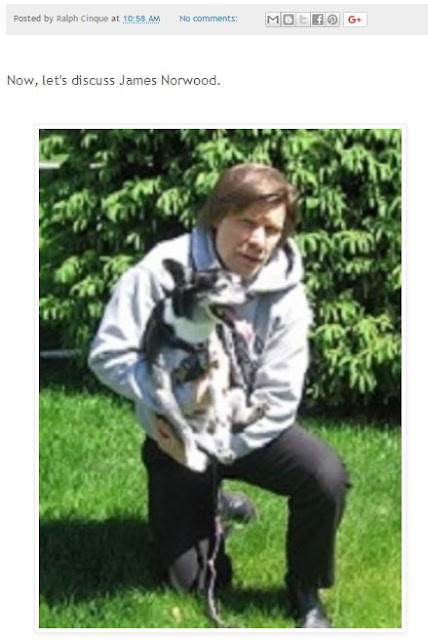 Here is an open letter that I previously published and it is followed by Professor Norwood's most current comments...

My name is James Norwood, and I was a member of the Oswald Innocence Campaign (OIC) for several years. On March 11, 2015, I assumed the position of Chair of the group.  At that time, I attempted to get to know the members on a personal basis and to understand the workings of the OIC organization.  Recently, I have stepped down from my position due to differences in philosophy with the founder, Ralph Cinque.  I am no longer a member of this group.  At this time, I wish to share my views on the Oswald Innocence Campaign.

During my tenure as Chair, the OIC’s webpage listed 51 Senior Members along with their photos and biographical profiles.  But Mr. Cinque could only locate e-mail addresses for 34 out of 51 members.  This means that 17 members (33 1/3%) are not only non-active, but impossible to contact.  Additionally, in the group’s e-mail forum, only a handful of the Senior Members ever participated in the discussions.  Without a critical mass of active members, the OIC is comprised primarily of a gallery of names and photos.  I understand that several of the members are in failing health and are physically unable to participate.  And, to be fair, I have experienced several stimulating e-mail conversations, but, in each instance, there were only three or four members sharing their views.  If it is impossible even to contact by e-mail up to one-third of the membership and only several members regularly engage in discussions, then this organization is functionally non-existent.

Mr. Cinque has dictated the content of the OIC home page with his single-minded purpose of presenting amateur photo analyses.  The seemingly endless diagrams of photo and film frame images are based on the premise that the photos are fake.  But there is no evidence presented that even remotely suggests where the films and photos were altered, who altered them, and at what time the alterations occurred.  Based on my scrutiny of the OIC’s home page, the theory of Altgens6 photo alteration is not persuasive, and, after years of debate on the internet, it has never been taken seriously by even a fraction of the JFK research community.

Mr. Cinque also maintains a personal blog and a facebook page.  He posts daily internet commentaries that have recently expanded well beyond the purview of the JFK assassination into such conspiracy theories as the death of Osama bin Laden.  As apparent in the two website titles, Mr. Cinque gives the impression that his personal opinions reflect the OIC organization as a whole.  The OIC blog site is entitled "Oswald in the Doorway:  The Blog of the Oswald Innocence Campaign."  The OIC facebook page is entitled, "Oswald Innocence Campaign:  Community."  I am troubled that the subjective views of Mr. Cinque are being presented in the guise of the OIC community, when in fact, the opinions belong to Mr. Cinque alone with no group consensus whatsoever.  Many of the postings of Mr. Cinque are part of his ongoing personal quarrels on the internet. There is no disclaimer indicating that his views do not represent those of the organization as a whole.  I have ethical concerns about a solitary writer engaging in nonstop, profanity-laced verbal jousting that gives the impression that Mr. Cinque's views are representative of the OIC members in general.

On May 26, I sent a proposal to Mr. Cinque for a new direction of the OIC away from Altgens6 photo alteration and into the more general area of studies of the JFK assassination and Oswald.  My proposal, which included the draft of a revised Mission Statement, was categorically rejected by Mr. Cinque, who invited me to step down as Chair and to exit the organization.  Due to (a) the narrow focus and unpersuasive content of the present OIC homepage, (b) Mr. Cinque’s misrepresentation of his personal postings on the blog/facebook pages, (c) the inability to contact a third of the Senior Members, and (d) a host of other issues, I am unable to recommend the Oswald Innocence Campaign to any serious researcher of the JFK assassination.


I have really appreciated these exposés by bpete and the opportunity to write comments. They are well presented and well-reasoned analyses.

The point that Ralph Cinque is unable to grasp is the inherent subjectivity involved in studying photographs. I find no anomaly and nothing sinister about the photo with Dallas police officer whose head is bowed. We could take a poll and probably find a few people who believe that the hat looks strange. But that discussion will not advance our knowledge of the JFK assassination. It is merely another time-waster like all of Ralph's endeavors (Oswald in the Doorway, Mary Moorman as Babuska Lady, Bookhout as Ruby).

I recently came across yet another internet site dedicated to exposing the wild and unsubstantiated photo conclusions of Ralph Cinque. The latest pictorial blog was prepared by "Jack Jackson" and may be accessed at the following site under the title of "Ralph Cinque Outed":

In Jackson's numerous discussions of the photographs, it becomes immediately apparent that (1) he has photo analytical skills that are vastly superior to those of Ralph Cinque and (2) he has prepared meticulous presentations to debunk Ralph's conclusions about such far-fetched issues as the tiny image of the woman and child in Altgens6. Ralph believes the images of the woman and the toddler have been “faked.” But this is just another example of a non-starter as a line of inquiry.

It is obvious that ANYONE can look at a photograph and draw fanciful conclusions. It is a far more challenging discipline to support and corroborate photo interpretations from hard evidence, including records, documents, affidavits, eyewitness testimony.

For example, in making their case for Oswald as Doorman, Fetzer and Cinque rely on Will Fritz's scribbled notation "out with Bill Shelley in front." But they fail to read the full narrative version of Fritz's interrogation notes, which places his earlier scribbled notes in context.  On p. 2 of Fritz's transcribed notes, he writes the following: "I asked him [Oswald] what part of the building he was in when the President was shot, and he said he was having lunch about that time on the first floor."  In other words, Oswald informed Fritz that he was INSIDE the building at the time of the shooting. If he had been OUTSIDE the building with an eyewitness (Shelley) to vouch for his presence, Oswald surely would have loudly proclaimed such an airtight alibi to Fritz and to the reporters in the hall who had asked him the same question.

The source for the Fritz citation above may be found at:

Ralph whiles away his life looking at photos, drawing subjective conclusions, and never taking the time to persuasively build an argument based upon multiple strands of evidence. He is only relying on the photos for opinion-driven discourse. It is for this reason that Ralph's theory about Oswald in the Doorway has never gained traction among serious JFK researchers.

The main topics that bpete has been covering in his recent posts are:

(1) Ralph's proclivity for revising and plagiarizing the work of others in the articles that appear on the OIC home page;

(2) The blatant use of circular reasoning used by Ralph and Jim Fetzer to advance their claims (i.e., "We have proven that Altgens6 is fake, thus we need no other evidence to demonstrate that it is Oswald standing in the doorway."); and

(3) the absence of a scientific foundation or even a crude knowledge of photographic art in the 1960s, in order to demonstrate their hypotheses;

Another point that I have added in one my comments is Ralph's lack of civility in his internet discourse.

In raising the topic of the "hat trick,” Ralph is overtly transparent in his attempt to deflect attention away from the valid criticisms of his work, as enumerated in bpete’s thoughtful presentations.

Thank you Professor Norwood. I will be posting this on both of my blogs...B
Posted by bpete1969 at 12:40 AM